“This is my favourite fried chicken to make at home. Something about the buttermilk that does magical things to the texture of the chicken, to make it melt in your mouth.” 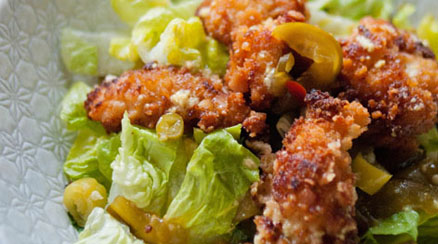 When I first made these, it was for a Thermomix demo with a few of my friends, and they were all impressed (as was I) with how soft, and moreish these chicken nuggets, made from chicken breasts actually were.

In Nigella’s Feast cookbook, she also says you can make a capery salad with the chicken nuggets, so I made a simple salad with the most amazing pickles from The Jammery. I had these gherkins at Brasserie Bread a few months ago, and most of us left with a jar in hand. Well worth it!

I used to HATE gherkins, then one day I snapped and decided I liked them. Now I can’t get enough of them, straight out of the jar will do!

Just blogging about these ritzy chicken nuggets makes me want them, perhaps I’ll have them again very, very soon…. I suggest you do to 😉