Masterchef inspired lots of us to make things we had never made before. A few weeks ago, I attempted the art of macarons. Having just bought the latest edition of the Australian Gourmet Traveller because of it’s gorgeous looking macarons on the front cover, I was keen to give them a go. Although, for some...

Masterchef inspired lots of us to make things we had never made before. A few weeks ago, I attempted the art of macarons. Having just bought the latest edition of the Australian Gourmet Traveller because of it’s gorgeous looking macarons on the front cover, I was keen to give them a go. Although, for some stupid reason I decided I was going to make them at 8.30 at night, which meant I was rather rushed. But I figured, if the Masterchef contestants could make macarons, pannacotta and a passionfruit slick all within 1.5 hours, surely I could do it too!

The Australia Gourmet Traveller website has a lovely history of macarons, if you wish to read, click here.
I ran out of time that night, so I had to make the raspberry ganache the following day and sandwich the macarons together.

They aren’t the best looking macaroons, they were meant to look like this: 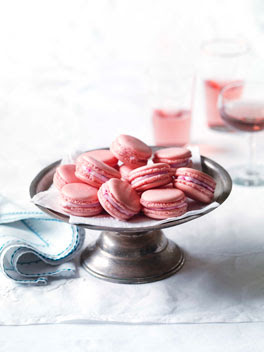 But for my first attempt they had the gooey centre and the macaron taste. I know alot of people that have thrown out their first batches of macarons so I was stoked that most of mine worked out! The hardest part was sifting the icing sugar and almond meal 3 times. Almond meal is very hard to sift, so my arms got a nice work out.

Next batch mine will look like the picture and I will take a photo to show you all, but for now, it’s on with the recipe!

1. Process icing sugar and almond meal in a food processor until finely ground, triple-sift into a large bowl and set aside. Whisk 90gm eggwhite in an electric mixer until soft peaks form (1-2 minutes). Add caster sugar, a tablespoon at a time, whisking continuously until incorporated and mixture is thick and glossy (2-3 minutes), then add food colouring. Stir in almond mixture in batches until incorporated and mixture slowly slides down sides of bowl when bowl is tilted. Add remaining eggwhite to loosen mixture, spoon into a piping bag with a 1cm plain nozzle, pipe 3cm-diameter rounds of mixture onto heavy baking-paper-lined oven trays, stand until a crust begins to form (4-5 hours).

2. Preheat oven to 140C. Bake macarons until firm but not coloured, swapping trays halfway through cooking (10-12 minutes), set aside, cool completely on trays.

3. Meanwhile, for white chocolate and raspberry ganache, bring cream just to the boil in a small saucepan. Remove from heat, add chocolate, stand until melted (5 minutes), stir until smooth and glossy. Refrigerate until firm yet still pliable (45 minutes-1 hour) then stir until smooth. Add raspberries, stir to form a ripple effect, then spoon a teaspoon of ganache onto half the macarons. Sandwich with remaining macarons and refrigerate until set. Macarons will keep for 1-2 days refrigerated in an airtight container.